Skip to content
FAST SHIPPING ACROSS THE USA
EMAIL & CHAT SUPPORT- Help when you need it. We need a close up of your pet’s face and chest so that we can turn them into a great piece of art! Try to get a close up of your pet. Being on the same level as your pet work best. Try to avoid taking photos from overhead. Remember to make sure their ears are in frame. You need good lighting for the best result. Photo taken outside or in a well lit room is always recommended, and that you're happy with the colors in your photo.

I got it for or dog because she loves to play ball but our cat stole it from her. Probably for the better because she's a tough chewer and destroys all of her toys, plus she didn't like the fact that it rolls and doesn't bounce. The cat however has been playing with it for 2 hours, and regular cat toys normally don't hold his attention for 2 minutes.

It's was pretty skeptical about the entire concept of this ball - My 5 yr old Cockapoo has lost her much older brother and elderly cat brothers over the last three years.a difficult adjustment for a very social dog . For times I can't play , this toy satisfies her need to interact . She never seems to tire of it and hides it when she's not playing. When it's charging she sits and whines waiting.. it does take two -three hrs .. but it lasts a couple of days on one charge . The ball is really fascinating and reacts with different , interesting motions - sometimes going across a room or changing directions mid stream . It's not noisy ( no annoying barking or sounds from it ) it's sturdy - my dig is a very heavy chewer and she's not been able to damage it . This is her second one bc we "lost" the first . The price is well worth the entertainment value and obvious joy she's getting . Guilt free time I get when I'm in the midst of work is great :) Highly recommend!

P
PerryPerry
Well worth the cost.

We have a 6lb, 4 month old Malshipoo who is a real handful. She loves squeaky toys and teething on us.I was totally fascinated with this AI toy. I was initially concerned she would be afraid of the lights but she wasn't. However it took her about 20 minutes to chew that fluffy orange tail off. Decided not to use the replacement, instead I had some florescent orange nylon cord which I attached braided and knotted. She is having a ball with it, she chases it it chases her. Fun for all.As far as the function of the toy goes, it's Iike having an unprogrammed Roomba. It will hide under the couch and then suddenly come zooming out.All in all, money well spent. Easily rechargeable and its like a Timex...it takes a licking and keeps on ticking. Oops, showing my age there. 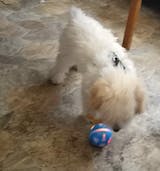 D
DBP
Nina is obsessed with this ball

Nina (Simone) is not quite two and a very curious and playful pup. I can only throw a toy or ball so many times if I want to get some work done. Except now this ball absolutely captures her attention and she loves it! What I love is that even if it goes under something it usually finds its way back out and there are no batteries to replace! Her sister Ella (Fitzgerald) is more of a couch potato. She was only interested for the first few days, now she just watches Nina go crazy with it. Nina is about 25 lbs of muscle - pit bull and chihuahua rescue with a lot of other breeds thrown in. I know several people's dog destroyed it but even though Nina plays very hard with it, it is doing great and the outside skin intact. I wish there was a dog soccer team. She is so good as a goalie or just batting it across the floor. I put it in her bed with a cover thrown over it and she will work it for 10 minutes or more until she gets it out, in the meantime it is teasing her with its noise and flashing lights. I can spend 10 minutes just laughing out loud watching her play. We let her have it for about 1/2 hour twice a day, so it still stays fresh for her, and she lets me know, quite loudly, when that time comes. We bought a second one for my husband's home office which is in a separate building and then we bought one for a friend's puppy. I will say that one of the balls just stopped holding the charge after several months. I emailed the company and they sent a new ball back within 5 days. They did not even ask for the old one back so great customer service. I can highly recommend this toy. I will try to get a video of her playing and post it.

We are the world's most unique pet portraits, in a style unlike anything around. We custom print your pets as Renaissance characters. Original & one of a kind creations never seen before. With a huge range of gifts and accessories for pet owners too.

6 minutes ago from Portland, OR.
Madison purchased a

10 minutes ago from Boise, ID.
Emma purchased a

18 minutes ago from Phoenix, AZ.
Jackson purchased a

6 minutes ago from Austin, TX.
Aiden purchased a

6 minutes ago from Los Angeles, CA.
Ava purchased a

16 minutes ago from Cheyenne, WY.
Liam purchased a

5 minutes ago from Atlanta, GA.
Mia purchased a

8 minutes ago from Portland, ME.
Lucas purchased a

12 minutes ago from Denver, CO.
Isabella purchased a

17 minutes ago from Hartford, CT.
Noah purchased a

7 minutes ago from Topeka, KS.
Zoe purchased a

15 minutes ago from Boston, MA.
Mason purchased a

18 minutes ago from St. Paul, MN.
Lily purchased a

10 minutes ago from San Diego, CA.
Ethan purchased a

14 minutes ago from Harrisburg, PA.
Caden purchased a

6 minutes ago from Albany, NY.
Logan purchased a

7 minutes ago from Santa Maria, CA.
Emily purchased a

4 minutes ago from Portland, OR.
Bryan purchased a

19 minutes ago from Boise, ID.
Nicholas purchased a

2 minutes ago from Phoenix, AZ.